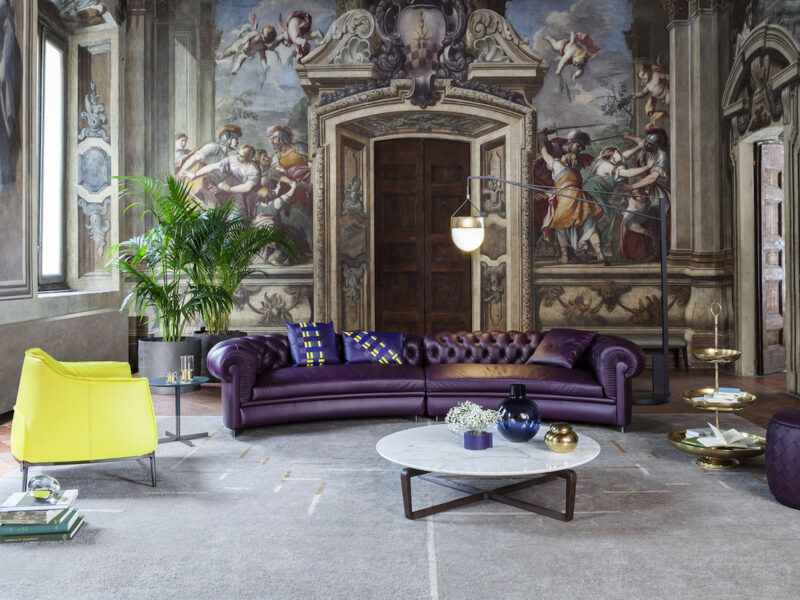 Manufacturing, unique style, timeless beauty: history of a brand through its most prestigious collections

Leather sofa and armchairs represent the archetype of elegant and timeless living room furniture. It is the classic in the best sense of the term, meaning that indicates the ability to reinvent oneself, without distorting one’s roots, which in the case of Poltrona Frau are anchored to an experience of over a century of high manufacturing. Poltrona Frau is in fact the brand that more than any other identifies the design and production of leather furniture, not only because it is a historical company but also because it has been able to innovate in the formal approach but also in the design of unexpected leather furniture, for bring this material beyond the boundaries of the living area, as we will see better later.

Poltrona Frau has never stopped doing research on the processing and presentation of contemporary finishes and color palettes, to be inserted with natural elegance in furnishing contexts devoted to design. Over the years it has involved innovative designers with international prestige to renew its collections. Without leaving the historical collections, which, moreover, continue to be sought after and desired even by the new generations. Poltrona Frau furniture is always iconic and knows how to be appreciated for a long time, accompanying those who choose it in different stages of life, in different ways and places. Also because the style is accompanied by the formal and substantial quality of each collection.

The evolution of Poltrona Frau models over the years

Among the merits of Poltrona Frau there is certainly that of having constantly worked on the catalog, introducing well-measured innovations. Without seeking the hype but rather with the aim of identifying new solutions for new life needs. Involving designers of depth and not only renowned, called to create starting from the company’s production roots and in line with its style.

The “English dream” in the early decades of the 1900s

To truly understand the Poltrona Frau style and its evolution over the decades, it may be important to contextualize the birth of this brand and its concept. The company was founded by Renzo Frau in 1912, a Sardinian, he had moved to Milan to join the military and then to Turin, where he had started working in an imitation leather production company. A business trip to Great Britain allows him to discover the Chesterfield armchairs, he is conquered by them and begins a successful import into Italy. With great enthusiasm and entrepreneurial spirit, he looks around, nourishing his baggage of French and Central European influences. Hence the idea of ​​founding Poltrona Frau in 1912: a laboratory of ideas that also brings together the influences of artists and creatives that Frau welcomes with foresight. He died prematurely in 1926, leaving his wife the reins of the company and a significant portfolio of projects that will nourish it in the years to come.

The Chesterfield style therefore marks the debut of Poltrona Frau and the entire first half of the 1900s, a period in which the company’s collections enter institutional places and aristocratic homes. In the second half of the 1900s, in the aftermath of the two wars, the social scenario changed, the domestic design and the concept of furnishings changed. Poltrona Frau stands up to change, involving the protagonists of this new vision of design: designers such as Gio Ponti and Gastone Rinaldi help to introduce collections with modern, essential, rounded lines. The aesthetics are renewed, the substance remains faithful to high quality production and research on materials. This is the era in which a new idea of ​​living room is established: less formal, more relaxed, it welcomes formal experimentation with pride and shows off it. In the 1980s, Poltrona Frau put into production the Ouverture sofa by Pierluigi Cerri: low, soft, rectangular and with an unprecedented structure at the base: a long-perforated beam, forerunner of the industrial taste that will become a trend starting in the 2000s. Demonstration of how Poltrona Frau has had the ability to experiment, even in a radical way, without fear and without losing its identifying elegance.

The 2000s were for Poltrona Frau the phase of consolidation of the relationships established with some of the contemporary design studios most consistent with the style of the company. And the growing interest in materials and production processes oriented towards sustainability. The color palettes are renewed, and the range of leather furnishings offered by the company is expanded: no longer just sofas and armchairs but also desks, dining chairs, bookcases and furniture for the sleeping area. A wide-ranging production that enhances the versatility of leather, a natural material with a timeless beauty.

A future as an icon is written in the destiny of each Poltrona Frau collection: because the company carefully chooses the designers to involve, to ask for projects that really have a reason to exist and not simply intended to increase the pages of the catalogs. The designs all enter history and at the same time are designed to transform over time, taking on new configurations and new colors that can adapt to changing life and new domestic scenarios. Just like the Chester armchair and sofa, from which it all began, and which are still perfectly integrated into a modern furnishing context today.

The Chester collection: origin and archetype

As already mentioned, the push to create the company was given to Renzo Frau from a business trip to Great Britain, during which he had the opportunity to discover the English tradition of the Chester sofa. Which from the very first catalog, in 1912, has never abandoned the production of Poltrona Frau, and has been able to assume new and unexpected configurations. However, remaining faithful to its fundamental characteristics: the capitonné workmanship performed strictly by hand, the backrest and armrests curled outwards and the visible, rounded, and wooden feet, possibly covered in leather.

When Renzo Frau dies prematurely in 1926, he leaves the management of the company and a series of projects not yet completed in the hands of his wife. Vanity Fair is one of these: put into production in 1930, it surprises with its modern design, essential and current lines. It is no coincidence that it has become the emblem of the company and a symbol of Made in Italy in the world. The structure is in solid seasoned beech, the back and sides are marked by a series of nails covered in leather.

The Dezza collection, which includes sofa and armchairs, is a sort of joint design manifesto by Gio Ponti and Poltrona Frau. Of the first we can read some of the recurring canons, such as the triangular section legs, the slender backrest, and the low armrests. Of Poltrona Frau, of course, we can read the ability to translate the beauty of leather into a modern aesthetic, starting to experiment with trendy shapes and colors starting from the 1950s.

The Poltrona Frau collections are all characterized by timeless elegance, by an aesthetic of character but never anchored to current trends, but rather to the style of the company. A style made of refined lines, refined details, and the ability to enhance the leather, a material by its nature destined to become more beautiful and interesting over the years.

Let It Be by Ludovica and Roberto Palomba

An invitation to relax, without worries, starting with the title of a Beatles song. Ludovica and Roberto Palomba confidently interpret the timeless style of Poltrona Frau with this living room system that can take on different configurations, without betraying its intent: to offer moments of informal conviviality, always with the spontaneous elegance that distinguishes its style. The series of accessory elements is also very interesting, such as the back-back shelf, which complete and make the living room system even more functional.

The Archibald armchair is one of the most interesting fruits of the collaboration between Jean Marie Massaud and Poltrona Frau: a fruitful collaboration, which over the years has led the company to renew itself with style. Archibald is a surprising combination of essential lines and refinement, comfort, and elegance. It is a game of clever contrasts: between the taut seat and the frivolous curl of the back, between the generous volume of the seat and the delicacy of the structure of the legs. The dining chair version is also very interesting, for a modern, welcoming, and highly elegant dining area.

Turner and Albero by Gianfranco Frattini

The Poltrona Frau style does not only involve the sofa and armchairs and over the years the company has introduced excellent examples of desks, beds, benches, and other furnishings in the catalog. Including, much loved the Turner and Albero bookcases by Gianfranco Frattini, which the company has successfully put into production. Turner is inspired by the English revolving bookcases, which belong to the same furnishing tradition that inspired Renzo Frau in the early 1900s. Albero is instead a completely innovative bookcase, designed for the center of the room and no longer, like the classic bookcases, for the wall. An authentic functional sculpture that brings with it the natural beauty that recurs in all Poltrona Frau projects. 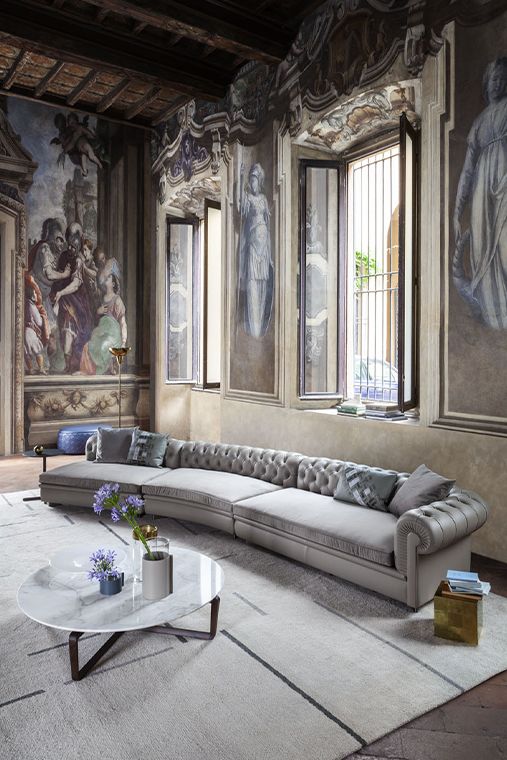 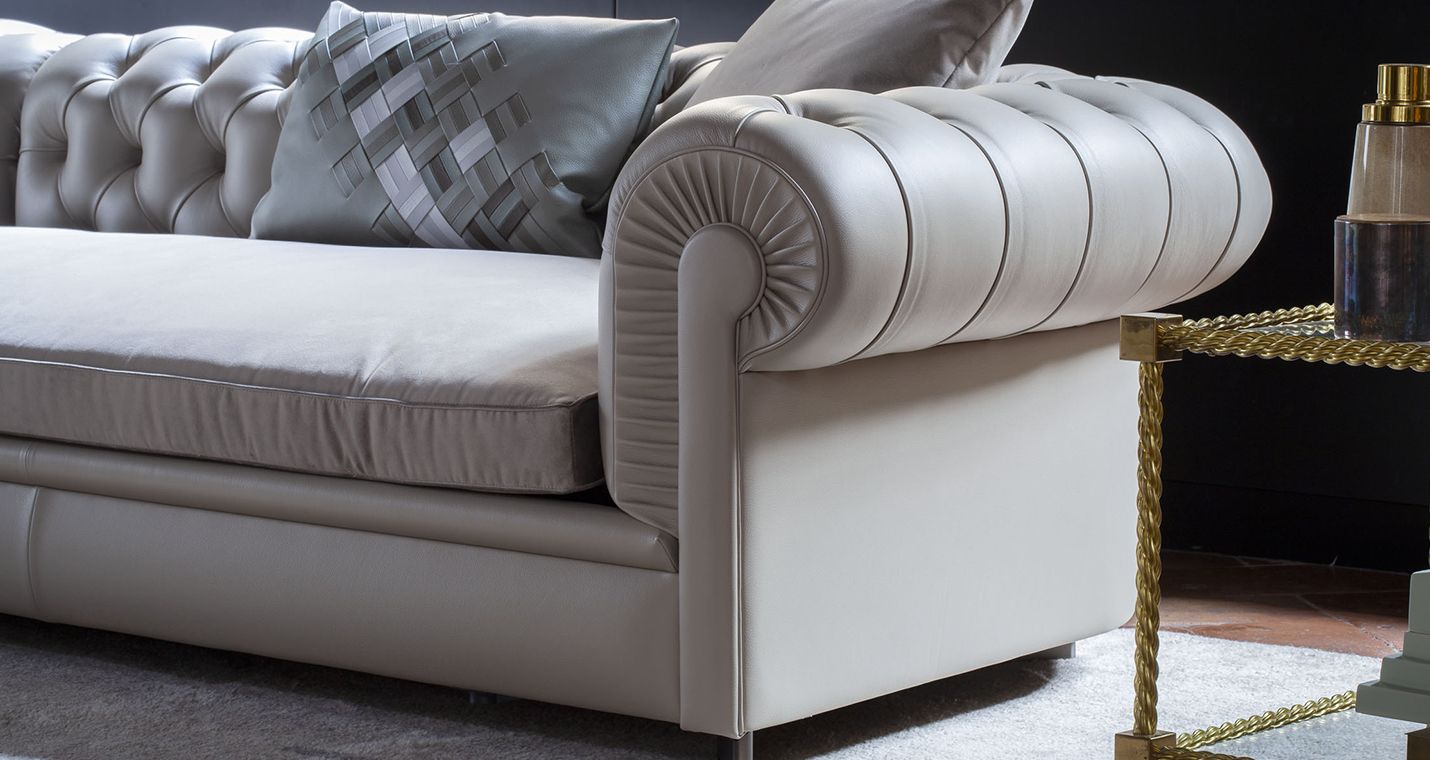 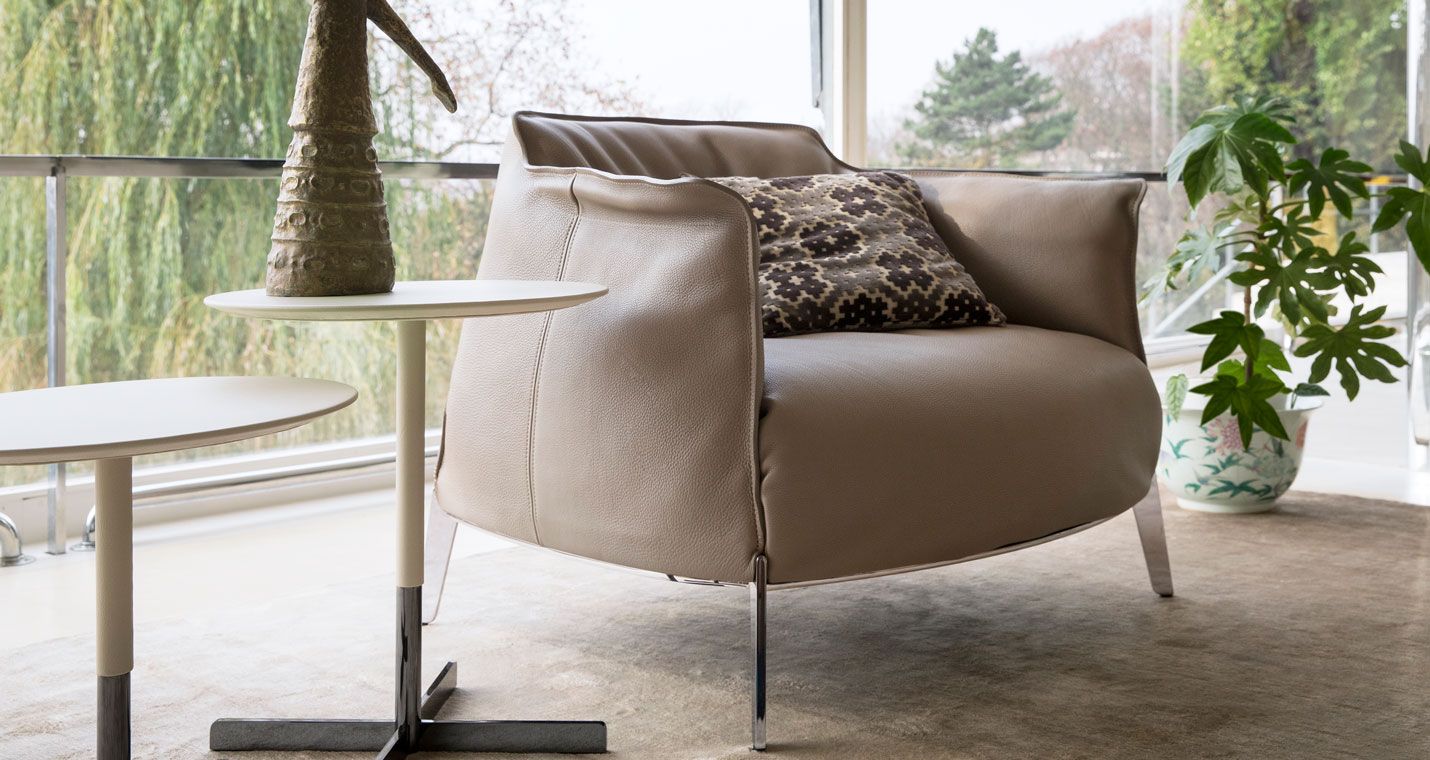 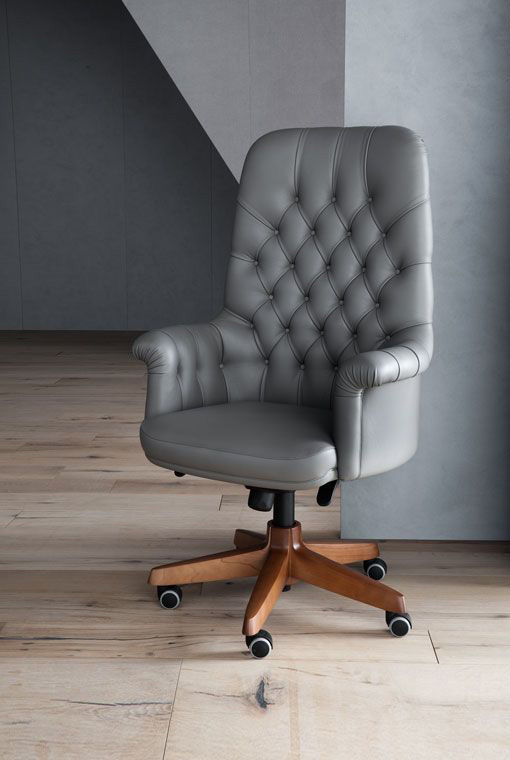 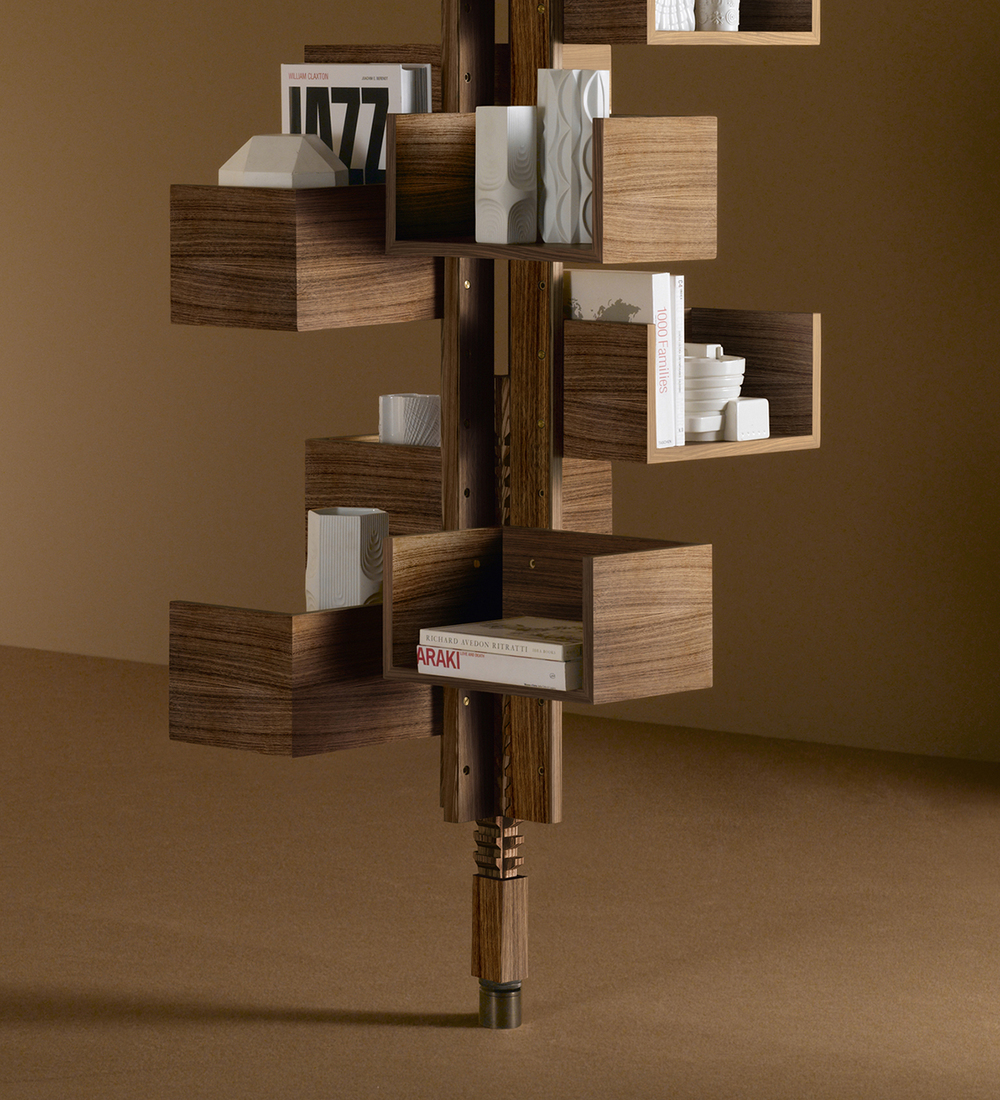 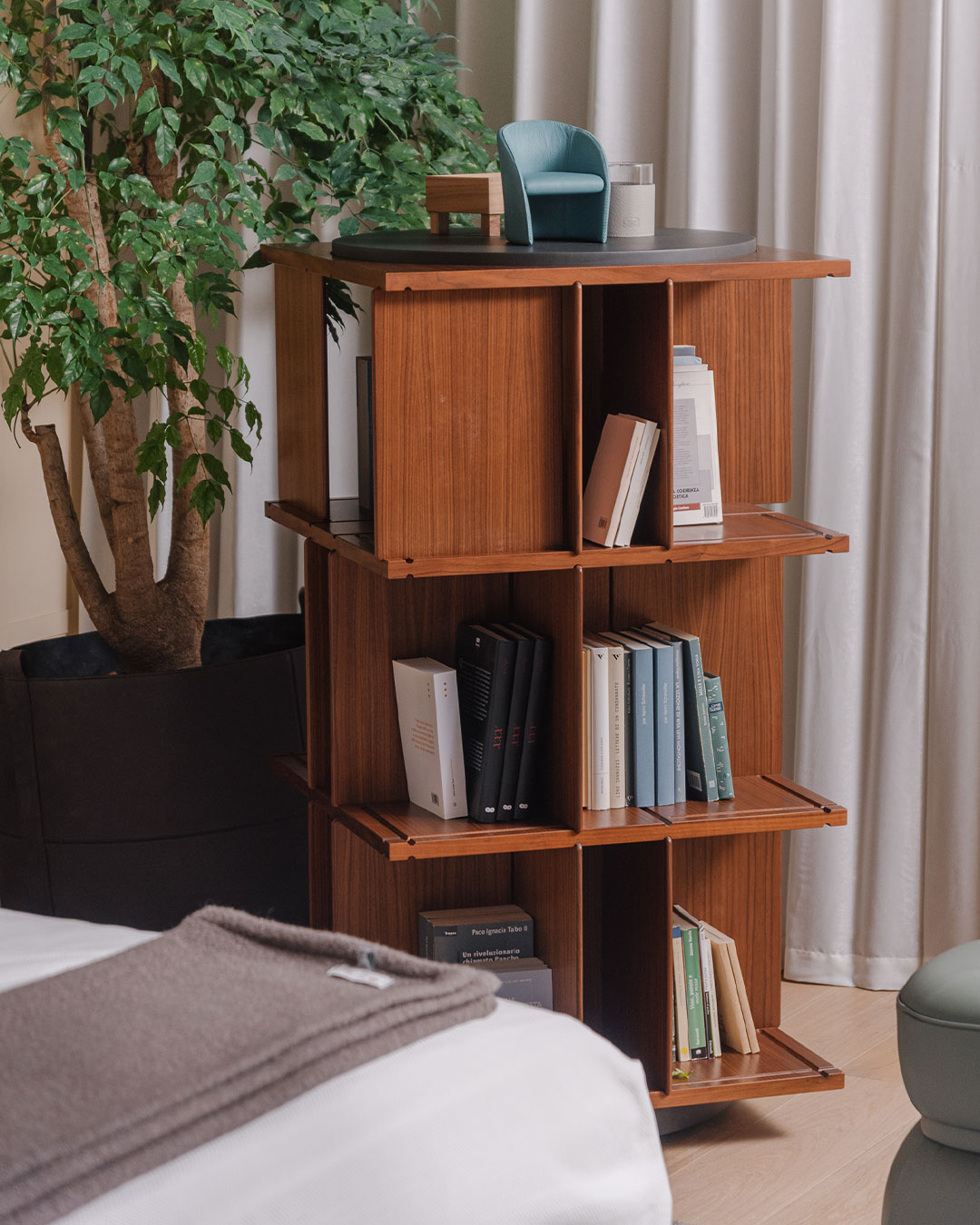 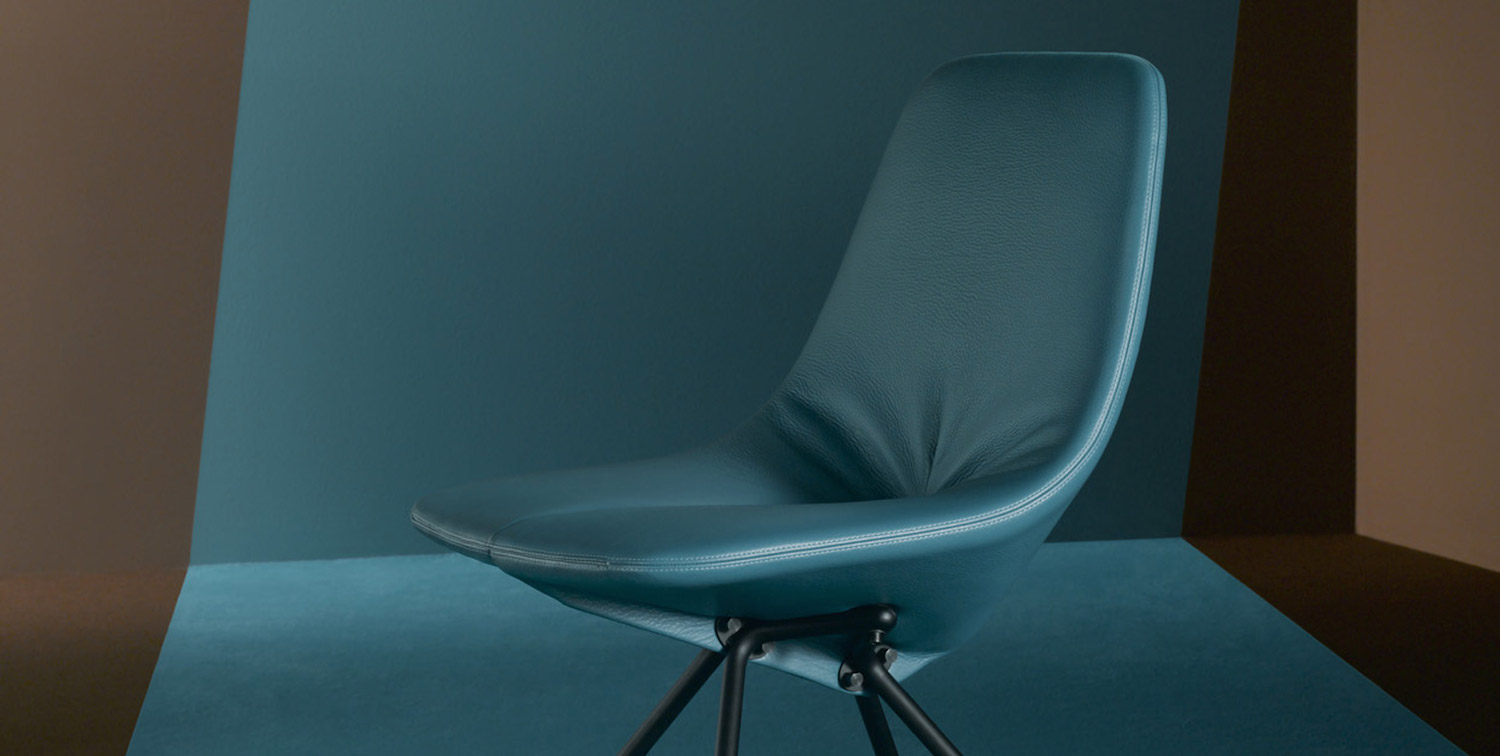 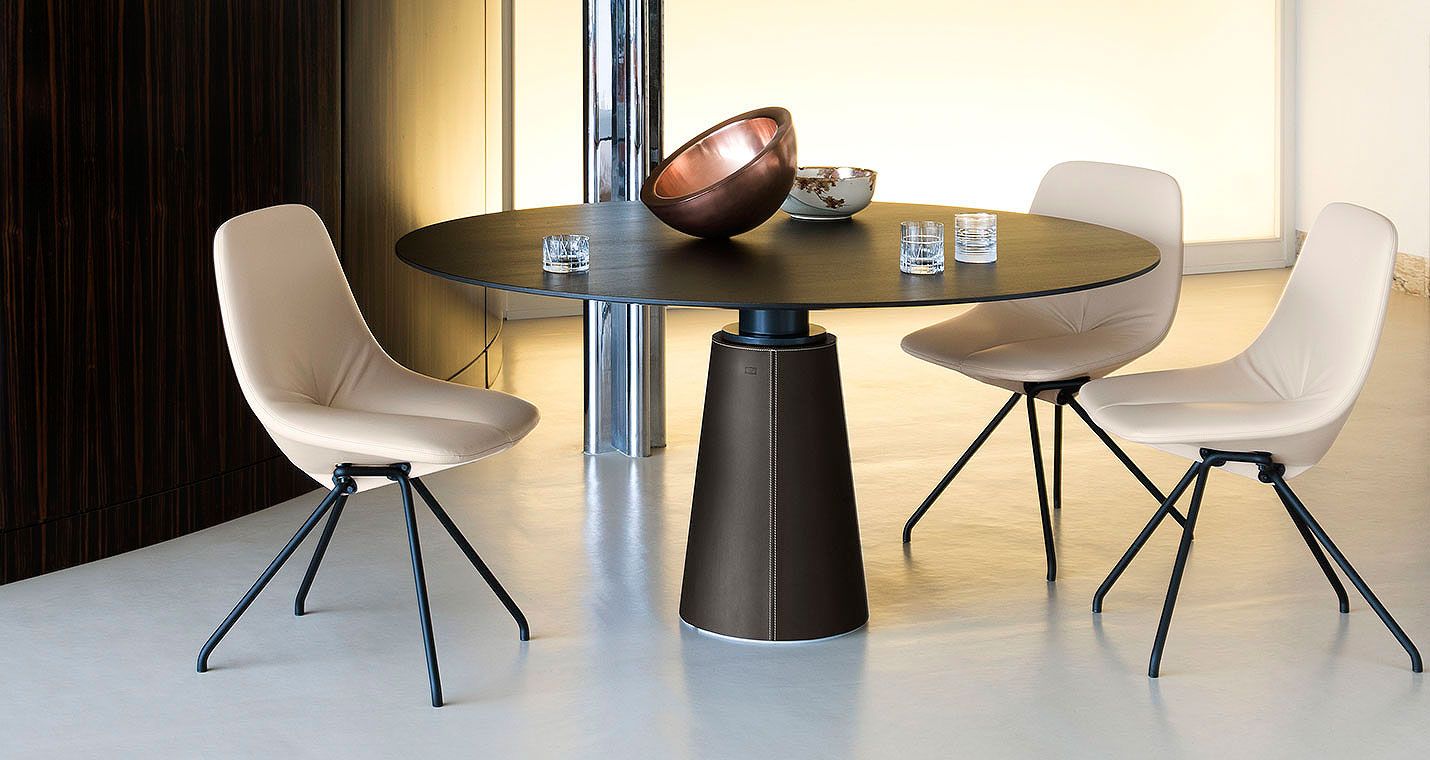 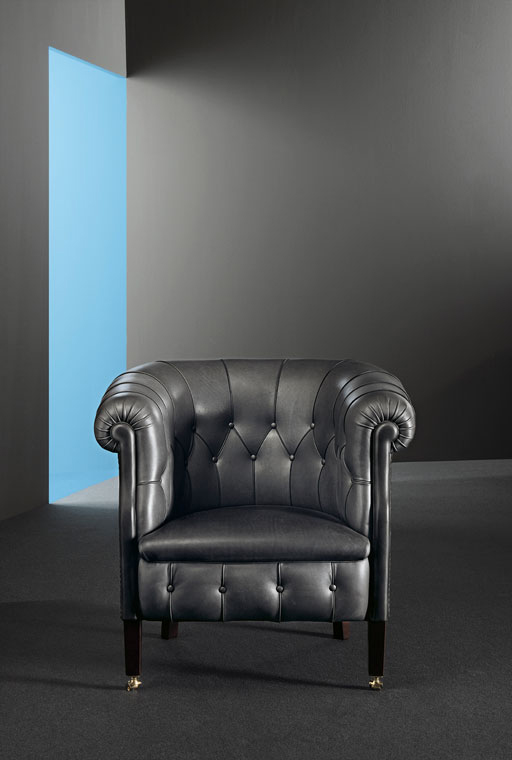 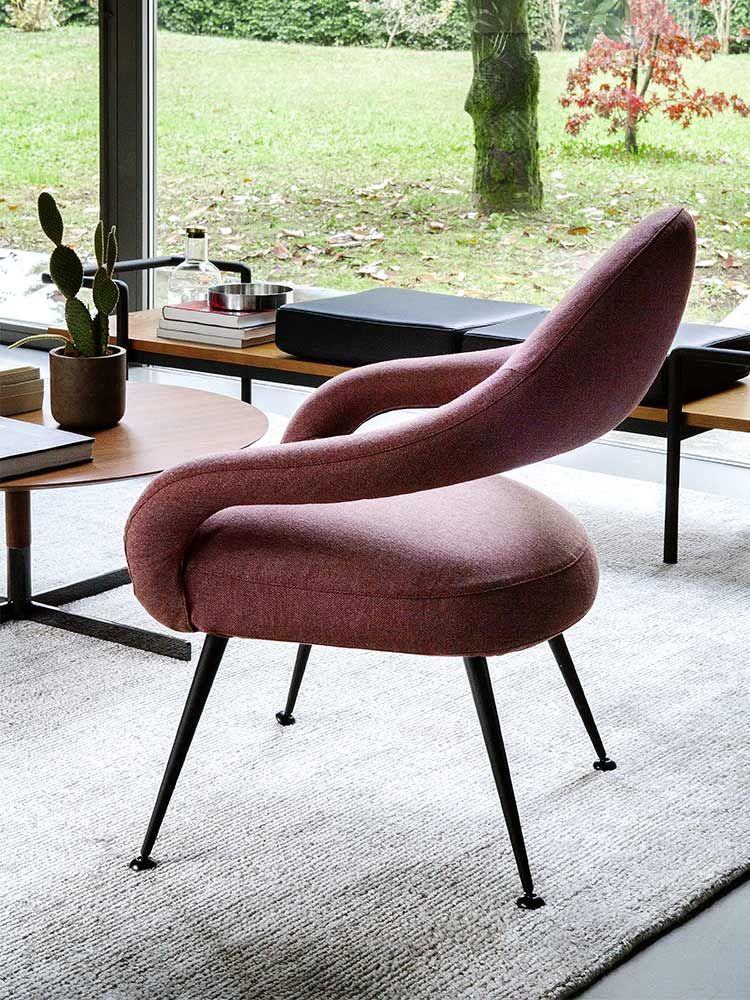 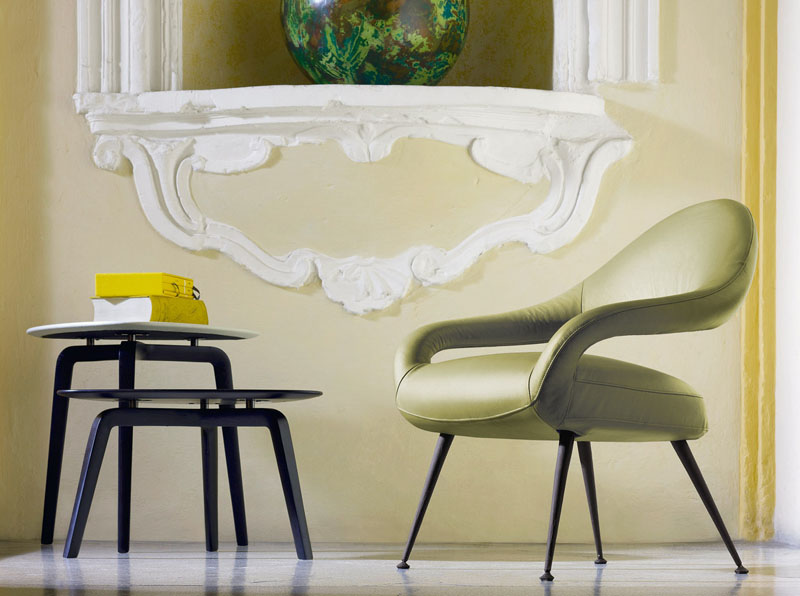 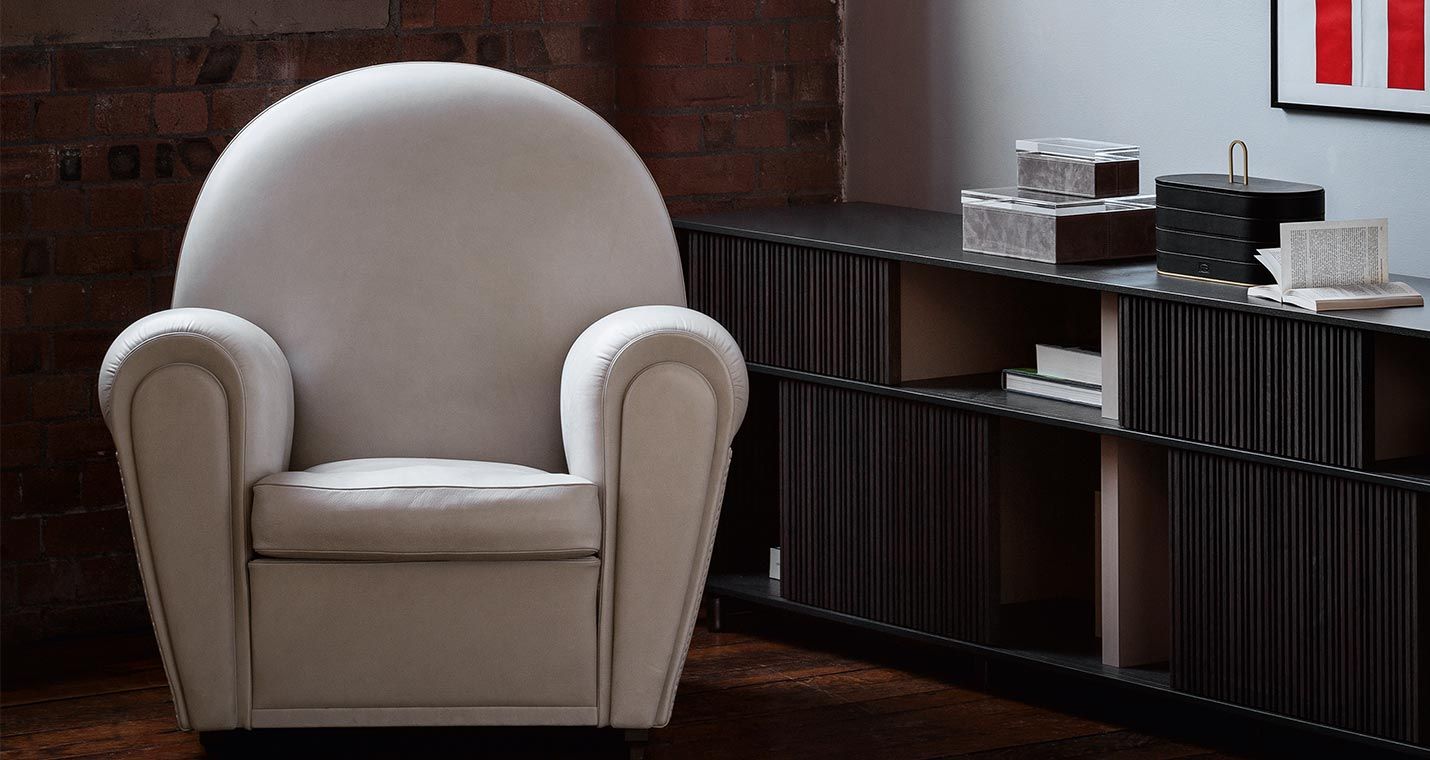 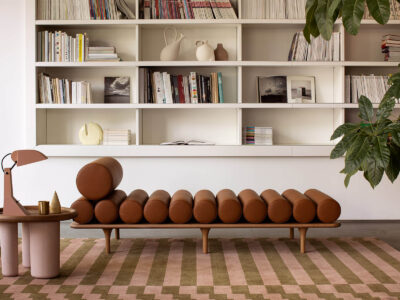 Entrance trend: designer benches to welcome you with elegance 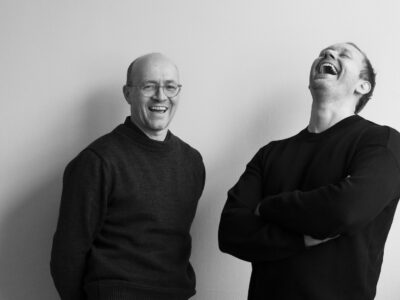 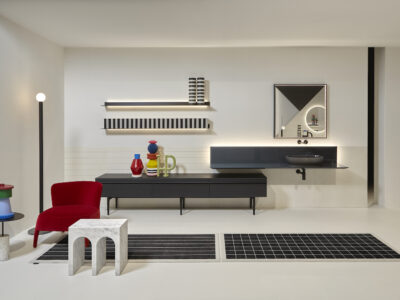 Antoniolupi and the new shapes for the bathroom 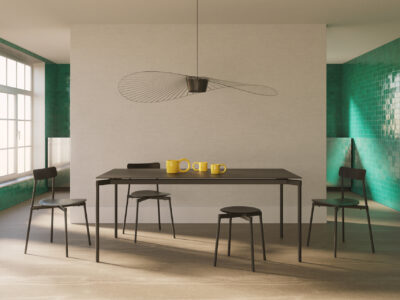 How an icon is born: the Vertigo lamp in a new and exclusive finish